FAU-G game has more than 5 million Downloads after 24 hours of its official release.

FAU-G game has more than 5 million Downloads after 24 hours of its official release. It has only a 3.4 rating on the Google Play Store.

FAU-G (Fearless And United – Guards) game is launch and available for download on the Occasion of Republic Day. The FAU-G game is the opponent of the PUBG Mobile India. The Game is based on the heroic of the Indian armed forces.

FAU-G game has more than 5 million downloads after the 24 hours and a half of its official release. It also got a huge response on pre-registration and a few days ago the pre-registration passed the 4 million. Today I am explaining to you about the FAU-G game 5 Million Downloads. Read this post till the end to know more about this.

It the massive popularity before its release but it gets only a 3.4 stars rating on the Google Play Store after its official release. The rating is low because of its game. Currently, there are no guns in this game. Users had very high expectations from this game but they nothing got like PUBG or other battleground games. Even it doesn’t come close to these battleground game. 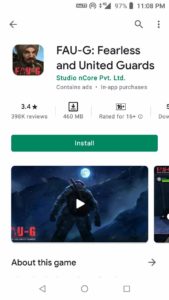 It has only mode “Campaign” to play in this game. In this mode, only fistfights are available no guns. It has only the brawler and remedial mechanic currently and it is very weak in the comparing to the PUBG and other battleground games. It may take too much time to reach the peak.

The FAU-G gameplay is based on India’s recent armed conflict against China at the Galvan Valley near the Indo-China border. The game depicts the real story of battle India’s China soldiers in 2020. In this battle, nearly 70 soldiers were injured and 20 soldiers martyred.

You play as FAU-G in the game, the enemy soldiers capture your companions and you have to find your companions. You run around the Himalayan valley, going from one enemy camp to another camp and fight with enemies. But you can only be fighting enemies with Fist and Melee. The founder and head of NCORE, Vishal Gondal confirmed the battle royal mode, and Player versus Player (PvP) will be updated soon.